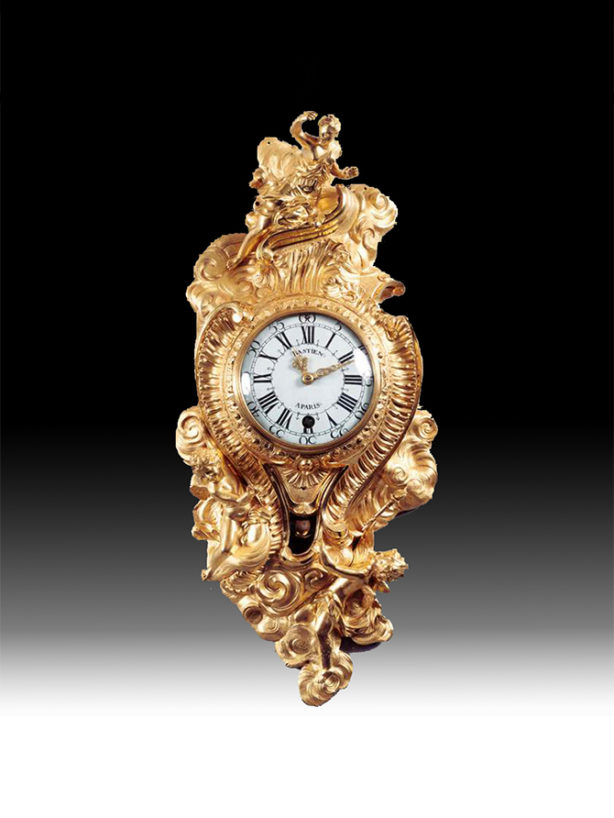 Signature: BASTIEN A PARIS on the dial

The model for this cartel clock was designed in 1728 by marquis Henri-Camille de Beringhen (1693-1770), premier écuyer du Roi, for the bed side of King Louis XV at Versailles. He commissioned Nicolas Le Sueur, master founder and marchand in Paris, to build the ormolu case, and Julien II le Roy (1686-1759, master in 1713), probably the most renowned clock maker in France in the 18th century to build a repetition movement par tirage. Julien Le Roy habitually chose freely the casings and bodies for his movements, except if, as is the case here, the client imposed his own choices. The drawings supplied by Beringhen were in fact very much appreciated by the clock-maker: « il a si bien réussi qu’elle [la caisse] a été généralement approuvée et admirée, tant par les connaisseurs que les gens de bon goût » (“he succeeded to such a degree that the casing was generally approved and admired, by connoisseurs as well as people of great taste”).

The chased ormolu cartel, crowned with a figure symbolizing the Point du Jour, seated on an asymmetrical volute surrounded with cloud bursts, features a circular white enameled dial, signed BASTIEN A PARIS, with Roman chapters for the hours, and Arabic chapters for the minutes. It is flanked with two large festooned volutes, and is underlined with a small V-shaped opening, partially revealing the pendulum. The lower part of the cartel displays two small angels seated on cloud bursts, in an asymmetrical manner.

This cartel for Louis XV was achieved in 1734. Its success encouraged Nicolas Le Sueur to replicate it on several occasions, especially for Monsieur Bonnier de la Mosson, one of the most recognized collectors at the time. Several similar cartel clocks are recorded today, featuring movements supplied by various clock-makers. Ours is the only one known as signed by Bastien.